My Sunday Without Mass 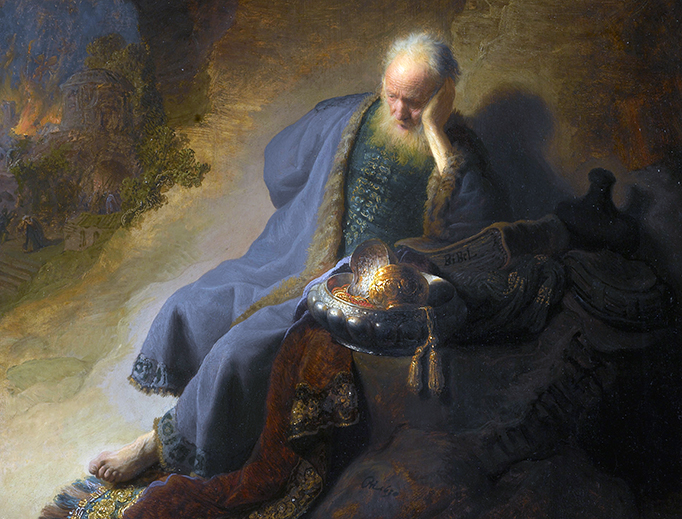 We trust that God sees our hearts — hearts that long for him, perhaps more than ever before.

I had been watching the spread of the coronavirus on the news for several weeks. But it became very personal last Friday at 11:30 a.m. when I got the call from my wife.

Don’t worry. No one in our household caught the virus. We’re all healthy. But my wife was informing me that the State of Colorado had just announced all public gatherings of 250 people or more needed to be canceled. We immediately knew what that meant. The Archdiocese of Denver would soon follow by canceling all public Masses.

So we quickly packed our kids in the car, rushed to a noon Mass and received Holy Communion for one last time before the looming moratorium. And sure enough, on our way home, we received the announcement — all public Masses in the entire state were canceled for the rest of the month.

How do we as Catholics continue to grow spiritually when we can’t receive the Eucharist? How do we keep the Lord’s Day holy when we can’t even go to Mass? The Bible offers a model for how we can still encounter God and worship him even when the House of the Lord is not available to us.

The Jerusalem Temple was the center of Jewish worship. It was the place where God’s holy presence dwelt over the Ark of the Covenant in the sanctuary’s innermost chamber known as the Holy of Holies. To draw near to the Temple was to draw near to God Himself.

Jews each year made pilgrimages to the holy city for various feasts as they longed to worship the Lord at the holy place. On their ascent to the Temple Mount, they would sing, “I rejoiced when they said to me, ‘Let us go to the house of the Lord!’” (Psalm 122).

But that all came to a dramatic halt in 586 B.C. when Babylon invaded, destroyed the Temple and carried the Jews off into slavery. God’s people faced a new dilemma: How do we worship God when we can’t go to the Temple? How do we worship the Lord when we are far away in exile and the temple is not available to us?

The Book of Lamentations expresses the people’s sorrow over seeing the empty streets in Jerusalem and no one coming to worship there, for the liturgies in the House of the Lord had ceased and the Temple was lying in ruins:

How lonely sits the city
That was full of people!
How like a widow has she become,
She that was great among the nations!
…The roads to Zion mourn,
for none come to the appointed feasts;
all her gates are desolate,
her priests groan… (Lamentations 1:1,4)

I couldn’t help but think of these verses when seeing images from Rome at the rise of the coronavirus outbreak. Streets I knew so well were surprisingly empty. Churches closed. Pilgrims nowhere to be seen. St. Peter’s Square practically desolate. And most shocking: no public Masses in Rome — the Eternal City! Shut down for weeks. For two decades I’ve taken people to Rome and waited in long lines with thousands of other pilgrims longing to go up to that magnificent, iconic St. Peter’s Basilica, the one House of the Lord which all Catholics throughout the entire world can call home. To see it empty brought a weight to my heart and marked how serious the situation had been in Italy.

But it’s no longer just St. Peter’s Basilica, and it’s not just Rome. In many parts of the world, Catholics are grieving the loss of public Masses. How lonely sit our own local churches in many dioceses — our churches that just a few weeks ago were full of people at the start of Lent. We might have complained about the Sunday morning traffic in the parking lot, but now we long for the day when our churches will be full again. Amid the uncertainty over the future, we cry out as the ancient Jews once did: “How Long, O Lord?” (Psalm 89:46).

Worship in a Strange Land

But God’s faithful people always find ways forward. Consider, for example, what the prophet Daniel did. He was a youth when he was carried off in the Babylon exile. Far from his beloved Jerusalem and with the Temple lying in ruins, he faced a new challenge: how would he worship God in these difficult circumstances? No temple. No priests. No sacrifices. No Jewish communion meals.

What did Daniel do? He put himself in the spirit and rhythm of the Temple liturgy. Daniel could have prayed any time of the day, but he chose to pray at the traditional hours when the sacrifices had been offered in the Temple, even though those sacrifices had long ceased (cf. Daniel 9:21). He also could have prayed facing any direction, but he opened his windows toward Jerusalem and “got down upon his knees three times a day and prayed and gave thanks before his God, as he had done previously” (Daniel 6:9-10). The pattern of worship in the Temple was his model for worship even though he had no access to the House of the Lord and its liturgies.

Mass on a Screen?

On that first Sunday morning without Mass, I woke up with another Old Testament verse on my heart:” I will look for my beloved; I searched for him but did not find him” (Song of Songs 3:2). I had a longing to receive our Beloved, Jesus in the Eucharist, but knew it was not possible to go to Mass.

Instead, our family assembled in the living room to watch on Facebook Live our parish priest celebrating Mass. Even though it was on a screen, we still wanted to make it a sacred time and a sacred space — a time and space set a part, markedly different from the rest of our day. We didn’t want it to be simply passively watching a Mass and saying prayers. We didn’t want people moseying down in pajamas, plopping on a couch or making popcorn to watch the show. We had everyone dress up a bit. The younger kids helped set up the chairs. We gathered around our computer screen, but cleared off the table on which it stood, put a crucifix on it and lit a candle. Time and space were set apart.

When the Mass began, we made the sign of the cross with our pastor. We sat, stood and knelt just as we would have if we were there at the parish with him. We recited all the prayers and responded with the expected “Amen,” “And with Your Spirit” and “Thanks be to God.” All things considered, the kids behaved decently well. If anything, I was the troublemaker. When we got to the offertory, I noticed a basket on the table next to me and handed it to my little kids who laughed and jokingly kept passing it around. At this disruption, instigated by dad, my wife gave me the eyes she normally gives our children. I quickly put it a stop to the play.

What made the time watching Mass a better experience than I expected was the fact that this was our pastor and he was offering Mass for us in real time as we were watching. This wasn’t just some priest on TV whom I don’t know. He was our pastor who loves his flock and his flock knows it. And this wasn’t a Mass in some faraway place or a pre-recorded liturgy. This was our priest, at our parish, and he was offering this Mass at the same time we were watching him. We were following along with him and praying with him as he led us through all the parts of the Mass.

A profound thought hit me at the moment of consecration. A lot of people have been talking about making a “Spiritual Communion” when you can’t go to Mass. This is the traditional practice of expressing one’s desire to be united with Jesus in Holy Communion when that is not possible. This is a very good habit to cultivate throughout our lives — not just during a coronavirus outbreak. Expressing and deepening our desire to be united with our Beloved Jesus draws us closer to him spiritually, even if we can’t receive him sacramentally.

But at the words of consecration, I found myself making what perhaps could be called a “Spiritual Sacrifice.” I was expressing in my heart my desire to still unite my life with the sacrifice of Christ which is made present at every Mass. This is a basic truth about the Eucharist. When participating in the Eucharistic Liturgy, we are called to unite all our works, joys and sufferings — our entire lives — in union with Christ’s offering of himself to the Father (CCC 1368). We offer ourselves in union with Christ’s total, perfect sacrificial gift of love to the Father. And we desire for Jesus to change our hearts and live his sacrificial love ever more through us. That’s what we should be doing every time we participate in the Mass.

But on this Sunday, I was actually not participating in a Mass. I was just watching a private Mass on a screen. But I still found myself wanting to unite my heart as much as I could with the sacrifice of the Mass at this most sacred moment in the liturgy: “This is my body … This is my blood.” I felt like Daniel, physically separated from the Temple and its liturgies, but trying his best to pray to God in the spirit and rhythm of the liturgy. Even though I was miles away from our parish and not able to participate in the Mass itself, my heart still had some spiritual connection to what was happening, right at that moment, at that same hour of prayer, that same hour of sacrifice.

No one knows for sure when public Masses will resume. But in the meantime, we, like Daniel, should try to make the best of a very difficult situation. We offer our sorrows over not being able to receive Our Lord in these days. We can offer them for all those who are battling COVID-19 and the countless people whose social, economic and spiritual lives are impacted by the dramatic events of the last week. And we trust that God sees our hearts, which long for him, perhaps more than ever before. Whatever trials we may be facing in these days, God can always bring some good out of them.

Dr. Edward Sri is a theologian, author, FOCUS Vice President of Formation and host of the All Things Catholic podcast. Learn more about his work at edwardsri.com

This article originally appeared in the National Catholic Register — https://www.ncregister.com/daily-news/temple