Whose Rights? The Paradox of Moral Relativism 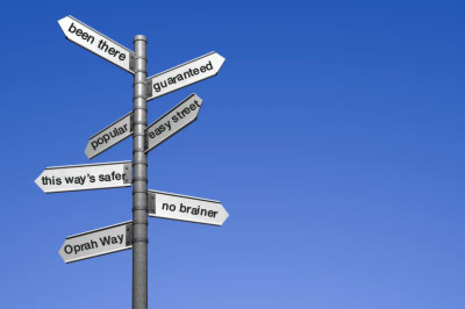 Whose rights are protected in a relativistic culture?

It is precisely on this point that relativistic societies face a serious dilemma:  How does a community arbitrate various individuals’ competing interests?  There is much rhetoric in our modern world about protecting human rights and every individual’s freedom, but what if one person or group wants to do something that is directly opposed to someone else’s values or interests?  How does a society decide whose “right” or whose “freedom of choice” will be protected?

Take, for instance, the following moral debates in our own times:

How does a relativistic society determine whose freedom of choice will be safeguarded and whose will be limited? In a culture that has no reference to a common good — that has no shared vision about the good life for man — these questions are not resolved in any fair way.  They remain constantly up for debate and completely up for grabs. Lobbyists maneuver in Washington.  Groups organize to protest.  Strategists try to sway public opinion.  Compromises are made and some will have to give up more than others.  But one thing is clear in the process:  not everyone’s “rights” are protected.  In the end, the very determination of what a human right is and whose rights are safeguarded is completely arbitrary.

A Mass of Individuals

The relativistic worldview exalts the autonomous self and emphasizes the individual’s freedom to do whatever he wants with his life.  But, as Bl. John Paul II explains, even if the self is promoted in an absolute way, the individual still will run up against others who have different opinions and opposing interests that threaten one’s own pursuits.  And these rival claims are not easily resolved with a relativistic outlook.

Instead of appealing to a common good and a moral standard to which all are accountable, we tend to navigate these situations through self-assertion, manipulation, and power moves. Instead of viewing our neighbor as someone with whom we are united in striving toward a common goal, we view him as an obstacle to our own desires and way of life.  As such, John Paul wrote in Evangelium Vitae,

People inevitably reach the point of rejecting one another.  Everyone else is considered an enemy from whom one has to defend oneself.  Thus society becomes a mass of individuals placed side by side, but without any mutual bonds.  Each one wishes to assert himself independently of the other and in fact intends to make his own interest prevail.  (no. 20)

“This is the sinister result of a relativism which reigns unopposed: the ‘right’ ceases to be such, because it is no longer firmly founded on the inviolable dignity of the person, but is made subject to the will of the stronger part. In this way democracy, contradicting its own principles, effectively moves towards a form of totalitarianism” (no.20).

In the face of these competing interests, not everyone’s freedom can be protected.  Some kind of compromise must be made.  “In this way, any reference to common values and to a truth absolutely binding on everyone is lost, and social life ventures on to the shifting sands of complete relativism.”  The Holy Father continues:  “At that point everything is negotiable, everything is open to bargaining:  even the first of the fundamental rights, the right to life” (EV, 20, emphasis added).

Once human rights are up for negotiation, the weaker members of society will find themselves at the mercy of the more powerful.  John Paul points out how when the basic human rights of an unborn child and the elderly, for example, are denied by modern democratic governments, it is a particular set of political rulers or even the majority of people who are making the determination about who receives human rights and who doesn’t.

In this way, the definition of human rights is based not on the good of individual persons or the good of society, but on the interests of those who are in power — whether it be the wealthy, governmental leaders or those who are able to shape public opinion and influence the political process.  “This is the sinister result of a relativism which reigns unopposed: the ‘right’ ceases to be such, because it is no longer firmly founded on the inviolable dignity of the person, but is made subject to the will of the stronger part.  In this way democracy, contradicting its own principles, effectively moves towards a form of totalitarianism” (no. 20).

Why Make the Sacrifice?

Christian ethicist Stanely Hauerwas raises an important issue along these lines.  People today tend to think they can do whatever they want with their lives and be morally good persons as long as they don’t hurt or limit other people’s choices.  But Hauerwas notes how this is a grand illusion rooted in the individualism of our times — an individualism that forgets how intertwined our lives really are. Because human persons are united together in solidarity, all forms of morality require us to make sacrifices for others in some way or another.  Hauerwas explains, “Insofar as we are people who care about anything at all, we necessarily impinge on the ‘freedom’ of others.  But we act as if we do not, thus hiding from ourselves and others the truth that we are necessarily tied together in a manner that mutually limits our lives.”

In fact, however, there is no morality that does not require others to suffer for our commitments. But there is nothing wrong with asking others to share and sacrifice for what we believe to be worthy.  A more appropriate concern is whether what we commit ourselves to is worthy or not.  (The Peaceable Kingdom, p. 9 emphasis added)

This is the crucial issue. There is nothing wrong in asking people to make sacrifices for a worthy cause.  But is it the Christian or the relativistic worldview that gives a better account for why one should suffer for the sake of others?

In both perspectives, individuals will not always be able to do whatever they want in life.  In both outlooks, people will run up against others who will limit their freedom.  The question is which worldview offers a good reason to make sacrifices for others?

In the relativistic worldview, the limitation of one’s freedom is not based on what is good for society, what is good for others, or what is good for the individual involved.  You are asked to limit your freedom simply because someone else asserted their will over yours — whether it be a stronger-willed family member, a bigger corporation, a set of political rulers, or even the majority in your society that voted against your values and interests. The curb on your freedom is not related to you flourishing more as a human person or to what is best for your community; rather it is based on someone else’s own selfish interests. And that’s not a convincing reason for you to limit your freedom!

The Catholic perspective, however, puts the call to limit one’s freedom in a wider context of human flourishing.  God made us to live for others, and when we offer our lives as a gift to others, we discover the deeper meaning of our lives.

No doubt, sacrificial love requires certain limitations on one’s freedom.  We deny ourselves in order to serve someone else’s good.  But this limitation is not viewed as something negative. When we give ourselves in service to others, we find a deeper fulfillment in life because we are living the way God made us.  When, for example, a man gives liberally to the poor, he realizes a deeper fulfillment in life as he grows in sacrificial generosity.  The sacrifice is not just good for the poor people he serves; it is good for him as well.

Similarly, when a woman serves her newborn baby and experiences chronic sleep deprivation for several months, she also discovers a deeper fulfillment in life as she lives her vocation as a mother growing in self-giving love.  Her dying to herself is not just a blessing for her newborn; it is a blessing to her as well.  In the Catholic view, sacrifices are not merely limiting.  They enrich one’s life and conform us more to Christ Himself. As Vatican II put it, “Man finds himself when he makes his life a sincere gift to others.”