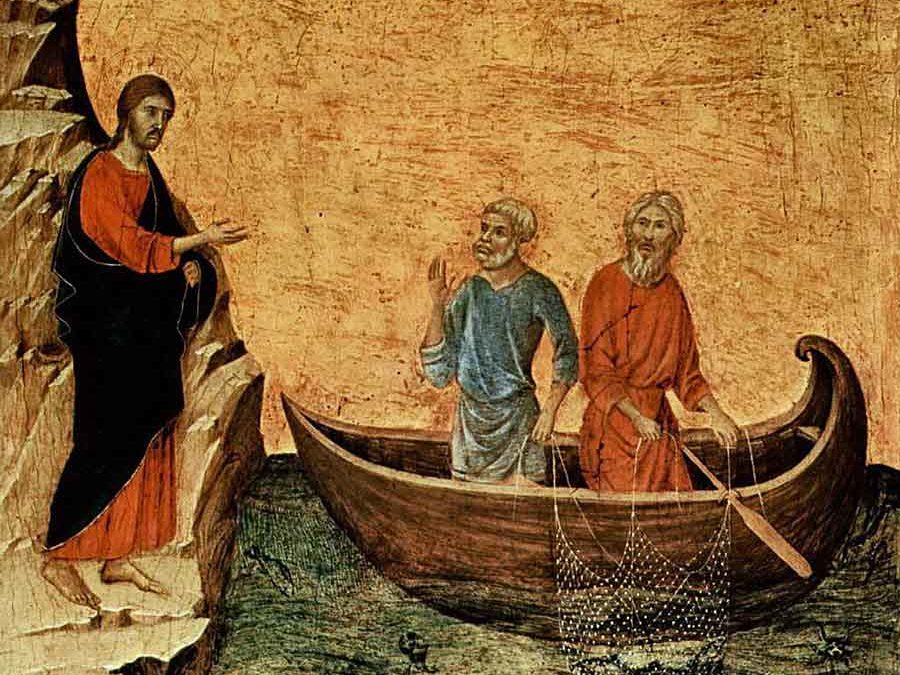 On a Spring morning along the Sea of Galilee some 2,000 years ago, the Risen Jesus asked his disciple Peter this deeply personal question: “Do you love me?”

At first glance, we might expect Peter to give a wholehearted, “Yes!”  After all, Peter is one of Jesus’ first disciples. He left his fishing nets behind long ago and made many sacrifices to follow Jesus as a disciple for the last three years. Moreover, Peter was made an apostle, given the keys of the kingdom, and made the rock upon which Christ would build his Church.

That’s why Jesus’ question, “Do you love me?” seems on the surface to be a no-brainer. Of course, Peter loves Jesus!  Peter the fisherman-turned-disciple, Peter the chosen apostle, Peter the First Pope—surely, he would be a model of faithfulness!

But the word Jesus uses for “love” here makes Peter pause.  The Gospel of John employs the Greek word agapao, which describes total, unconditional, self-giving love—the kind of committed, sacrificial love Jesus models throughout his life, most especially on the Cross.  Jesus, therefore, is not asking Peter if he loves merely with ordinary human affection. Another Greek word, phileo, describes thank kind of love—the tender love of friendship, but not all-encompassing. Rather, Peter is being asked if he loves as Christ loves.  Does Peter love Jesus with agape love?

At this, Peter holds back. He knows he can’t go there. He sadly wishes he could say yes, and in the past, his naïve over-zealousness may have led him to do so.  In fact, not too long ago, Peter even boldly pledged his absolute fidelity to Jesus, saying at the Last Supper, “Lord, I am ready to go with you to prison and to death” (Luke 22:33). But his three-fold denial of Christ later that same night made painfully clear Peter’s shortcomings in agape. Peter gives in to fear, betrays his friend three times and turns away weeping bitterly when he realizes what he has done. He has tasted the bitter sorrow of his weakness and infidelity.

So now, a much more humbled Peter qualifies his affirmation of love. He admits to Jesus, “Lord; you know that I love you (phileo).” It’s as if Peter is saying, “You of all people, Jesus, know how far away I am from agape. You know that I am only capable of loving you with my weak, imperfect human love: philia.”

Jesus, however, doesn’t back down. He asks a second time, “Do you love (agapao) me?” Again, Peter humbly admits he can only love Jesus with his poor human love: “Lord; you know that I love you (phileo).”

Jesus Meets Us Where We’re At

Finally, Jesus changes the question. He does not lower the standard of love in any way, but he does lower himself to meet Peter where he’s at.  He accepts what Peter can offer, even if it’s only weak, human love. He uses the word phileo: “Do you love (phileo) me?” In this, Jesus puts himself on Peter’s level and does not demand that Peter immediately rise up to his. And that’s encouraging to Peter. He replies to Jesus as if to say, “Lord, you know everything. You know this is all I can do on my own. The best I am capable of offering is my weak, broken, human love: philia. I wish I could do more, but I humbly entrust this very imperfect gift to you.”

And here we come to the most amazing part of the story—and the one that sheds light on the drama of our own walk with the Lord.  Jesus accepts this imperfect human love of Peter’s and transforms it into agape. Peter finally presents himself to Jesus as he really is—not in the inflated view he previously had of himself or in the ideal way he’d like to live someday—but in the truth of his own fragility. And once Peter does that, once he comes to terms with the truth about himself—that he is simply not capable of agape—a new era begins in Peter’s friendship with Christ. At precisely this moment, Jesus suddenly starts talking about how Mr. Philia Peter will one day live agape like Christ himself did. Peter will be changed. His heart will be transformed.  One day, Peter will find his hands stretched out on a cross like Jesus’ were on Good Friday. Indeed, Jesus foretells Peter’s crucifixion in Rome: “‘when you are old, you will stretch out your hands, and another will gird you and carry you where you do not wish to go’ (This he said to show by what death he was to glorify God)” (John 21:18-19).

The story of Peter’s transformation is the story God wants to write in the hearts of all disciples.  Jesus wants to meet us where we’re at, as we are, with all our fears, wounds and sins, and transform our philia hearts into agape.

Indeed, what Jesus did in Peter, he will do in all of us—if we learn to follow him as a disciple.

Discipleship: It’s All About Transformation

The Biblical theme of discipleship reminds us of how being Catholic is not a stagnant reality: “I identify on this survey as Catholic”…. “I attend Mass on Sundays”….”I’m orthodox in my beliefs”. All that is very good, but living as a disciple involves much more. Discipleship is something intensely dynamic. It implies movement and transformation as the disciple deepens his friendship with Christ and becomes ever more like Him.

A true disciple knows what he’s made for: transformation in Christ (B). But he also knows the many ways he falls short (A). Discipleship is all about moving from A to B.

When our Catholic Tradition speaks of “growing in holiness,” “pursuing sanctity” and “becoming saints,” it’s basically describing this life-long process of a Christian disciple being ever more transformed by God’s grace—being changed into Christ’s likeness “from one degree of glory to another” (2 Cor 3:18).

This article is based on Edward Sri’s new book on discipleship, Into His Likeness: Be Transformed as a Disciple of Christ