A Bullet, A Pope & Our Lady of Fatima for Today 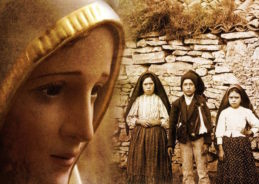 Imagine a Pope approaching a statue of Mary, carrying a bullet in his hand, putting the bullet in Mary’s crown, and repeatedly saying to her, “You saved me…You saved me…”

That’s what happened in 1982 when St. Pope John Paul visited the apparition site of Our Lady of Fatima in Portugal, a year after he had been shot in St. Peter’s Square. But the pope wasn’t just giving thanks to Mary in a general way. He was recognizing the crucial role the apparitions of Our Lady of Fatima specifically had in summing up the drama of the last century—a drama in which John Paul himself was caught up in a profound way.

Our Lady of Fatima is known for her many predictions that came true over the course of the 20th century. She foretold the end of World War I and a greater world war on the horizon if people do not repent. She also predicted the rise of communist Russia, which would provoke more wars, famine and persecutions of the Church.

Most intriguing, however, was the mysterious “Third Secret” of Fatima featuring a vision of a pope killed alongside other martyrs. John Paul II came to see this vision as pointing to himself when on May 13,1981, he was shot in St. Peter’s Square in an assassination attempt that nearly took his life.

Two bullets hit his abdomen, but neither struck a vital organ. One bullet was only inches away from piercing his heart and aorta. The date of the assignation attempt was the same date as the first apparition of Mary at Fatima: May 13.

Reflecting on the vision of the Third Secret, John Paul II knew it was Our Lady of Fatima who was protecting him. He later said that while the assassin’s hand fired the shot, “…it was a mother’s hand that guided the bullet’s paths and in his throes the Pope halted at the threshold of death.”

What You Can Do Today

John Paul II’s strong devotion to Our Lady of Fatima focused on one particular request she made. In fact, it was the only request she made at all six of the apparitions: to pray the Rosary daily.  In a world turning away from God, from the family, and from peace and with the rise of Communist Russia and another great World War on the horizon, Mary one hundred years ago in Fatima called on us to turn to the rosary. And in more recent memory, John Paul II called us to do the same.

While the communist regimes of the Soviet empire are no longer a threat, new forms of oppression are rampant today—the “dictatorship of relativism,” for example, which punishes anyone who proclaims moral truth; the culture of death which views weak, innocent human persons such as the unborn, the handicapped, the poor and the elderly not as persons to be loved, but burdens to be avoided at all costs and even disposed of; the breakdown of marriage and family, not only in practice but even in our definition of these sacred realities.

One hundred years ago, Mary told us to turn to the Rosary to face the challenges of that generation. And the challenges today are even more dramatic. If we want to build strong marriages, protect our families, secure peace in the world, let’s remember Our Lady of Fatima, and turn to the power of the Rosary.

Even if you’ve never prayed this prayer before or have fallen away from this devotion, you can get started simply by saying one decade every day. Do you have 2.5 minutes you can give to Jesus and Mary? For your marriage? For your family? For souls?

Our Lady of Fatima challenged us to pray the rosary not just every-once-in-a-while when we feel like it. She called us to pray it daily. In this 100th anniversary of her apparitions, let’s honor Our Lady and make the commitment to incorporate the rosary into our daily lives.