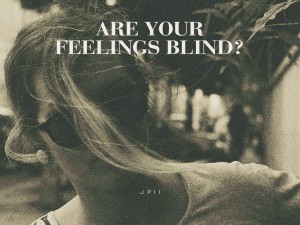 Men and women often persist in relationships that, deep down, they know are not good. They notice certain faults in the other person. Problems begin to surface. Anxiety and insecurity take over. They see the red flags, but do nothing to end the relationship.

But a lot of justification must take place. “When you’re emotionally attached,” one young woman explained, “you focus only on the good. You overlook the problems. You’re quick to make excuses for the other person.”

This caused great difficulties for another woman who was dating someone in college. “I started seeing how he treated his family and his roommate. Then I started noticing how he was treating me. I sensed there were problems but I kept telling myself, ‘He’s not that bad. He’s not always like that.’ But if I were on the outside and saw my friend going through a relationship like that, I would have done all I could to convince her to get out of it. But I gave my heart too much too fast, and I couldn’t see what was really going on.”

One man says he regrets not using his head more than his emotions to guide him in his dating relationships. He looks back and wishes he observed more how his girlfriends handled conflict and stress, whether they lived to serve others or themselves, how they treated family and friends, and how they responded to things that were important to him. “If I wrote on a sheet of paper the things my girlfriends actually said, what they did, how they acted, and what they believed, that would have been a big eye opener…If I simply read about them and asked, ‘Is this be the kind of woman I’d like to marry?,” there’s no way I would have continued dating them.  But I never used my mind to look at their virtue. I just focused on their good looks or went with my emotions.”

Out of All Proportion!

This tendency to be swept away by our emotions and to avoid questions of truth is characteristic of sentimental love. We are inclined to exaggerate the value of the per- son we have feelings for, downplaying their faults and ignoring any problems we have in the relationship.

Here, John Paul II makes an amazing statement about how much our feelings can control our perception of the person to whom we’re so attracted. “Thus, in the eyes of a person sentimentally committed to another person the value of the beloved object grows enor- mously—as a rule out of all proportion to his or her real value” (112, italics added).

This idealization can manifest itself in many ways. For example, a woman shows up at a Catholic young adult gathering and meets a devout man who exhibits three-and-a-half of her favorite virtues and actually is somewhat good-looking. Though she just met him, she catches herself wondering, “Maybe this is the one!,” and thinks about him throughout the week.

A young man who exaggerates his girlfriend’s good qualities while ignoring many problems in their rela- tionship may rush into marriage with the illusion of having found true love. When the real nature of their relationship becomes apparent, he says to himself, “I wish I thought about this before I got married.”

A married man not feeling close to his wife may develop an emotional attachment to another woman. He finds himself thinking about her often and going out of his way to see her. He idealizes this other woman, saying to himself, “She really understands me much better than my wife does.” If we’re not careful, these are just some of the many ways our emotions can hinder us from seeing the truth about our beloved, about ourselves and about what kind of relationship really exists between us.

This article is based on a chapter from Edward Sri’s updated edition of Men, Women & the Mystery of Love – his classic practical reflection on John Paul II’s Love & Responsibility and Theology of the Body