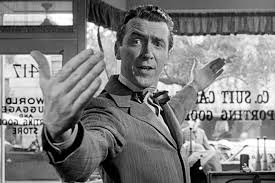 One thing that makes It’s a Wonderful Life so inspiring to generation after generation is that it showcases ordinary, everyday heroism—a heroism everyone can relate to. Unlike most heroes today, the beloved main character, George Bailey, finds his adventure not in sports or on the battlefield in some foreign land. Rather, George discovers his great adventure in the middle of his normal daily life with his family, friends, and community in the small town of Bedford Falls.

George certainly had dreams full of travel, excitement, university studies, and seeing the world, but those plans gave way one by one to a deeper sense of responsibility to his family and community. As his life goes on, he starts to feel frustration and regret as he watches those he grew up with living their dreams while he remains in Bedford Falls. When tragedy strikes and he is in danger of going to prison because of someone else’s mistake, he despairs and considers suicide, wondering if his life has meaning and whether all his sacrifices were worth it.

Just at this moment, his guardian angel, Clarence, appears to help him see the profound meaning of his life again. Clarence does this by showing him what Bedford Falls would be like if George had never been born. He takes George on a tour through the town, visiting all the people whom George had impacted throughout the years: his mother, wife, uncle, the local druggist, a girl he knew from childhood. But in this world without George Bailey, his mother ends up a cranky and suspicious old widow, his wife a nervous spinster, his uncle a crazy man, the druggist a ruined drunk, and his childhood friend a prostitute. The town itself is now controlled by the antagonist of the film, the greedy banker and Bailey family rival Mr. Potter, who has the people of Bedford Falls under his thumb, all because George Bailey was never there to stop him. At the end of this journey through a George Bailey-less Bedford Falls, George realizes the enormous gap left by his absence—and just how wonderful his life really is. And his life is, in fact, wonderful precisely because he chose to live for something much bigger than himself and the pursuit of his own interests. He used his freedom to live for others. In the words of author William Kilpatrick:

The life of George Bailey is a hero’s story. He is, moreover, a hero we can readily identify with. His heroism is the heroism of sustained commitment in the face of unlooked-for burdens and unforeseen turns of fate. His heroism, like that of most adults, consists in refusing the temptation to be free and uncommitted.[1]

Being free in the sense of being uncommitted. That’s what modern man aims for. Always keeping options open. Not wanting to be tied down. But living this way never satisfies the desires of the heart. It isolates us. It leaves us restless, always hankering for something more. Only when we give up our freedom to do whatever we selfishly want all the time (modern freedom), do we discover a greater freedom: the freedom to love (classical freedom). Only in relationships of sustained commitment will we find our happiness.

This excerpt is from Edward Sri’s newest book, Who Am I to Judge? – Responding to Relativism with Logic & Love (Ignatius Press).