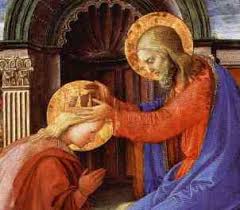 Have you ever wondered why Catholics treat Mary like a queen?  After all, the Scriptures don’t seem to tell us anything about this simple woman from Nazareth having a royal position in Christ’s kingdom.  And besides, Mary is not the wife of the King Jesus.  She is just his mother!

A closer look at Scripture, however, shows us that it is precisely from a Biblical perspective that Mary’s queenship makes perfect sense. For in ancient Israel, it was the king’s mother who reigned as queen, not the king’s wife. Most kings in this period had large harems. King Solomon, for example, had 700 wives and 300 concubines (1 Kings 11:3). It would have been impossible to bestow the queenship on 1,000 women!  Yet, since each king had only one mother, the queenship was typically given to her.

The queen mother was given the title “Great Lady,” and we can see her importance in a number of passages from the Old Testament.  For example, when 1 & 2 Kings introduces a new king in the Kingdom of Judah, it almost always mentions the name of the king’s mother alongside her royal son. The queen mother also is portrayed as a preeminent member of the royal court, wearing a crown on her head (Jeremiah 13:18) and heading the list of palace officials in the kingdom (2 Kings 24:12-15).  Furthermore, the queen mother had a real share in her son’s reign, helping in his mission to shepherd the people (Jer. 13:18-20) and serving as a trusted counselor (see Proverbs 31).  But most of all, the queen mother served as an advocate for the people, hearing their petitions and presenting them to the king.

One Biblical woman who illustrates the queen mother’s royal prerogatives most clearly is Bathsheba.  Consider what happens when Bathsheba transitions from her role as the wife of king David to her role as queen mother after her son Solomon assumes the throne.

When her husband David still reigns as king, Bathsheba enters the royal chamber, and she approaches him like most subjects in the kingdom would: she bows with her face to the ground, pays him homage and says “May my lord King David live forever!” (1 Kings 1:16, 31).

However, after David dies and her son Solomon becomes king, she is treated very differently, for now she is queen mother.  Right away a man from the kingdom recognizes Bathsheba’s role as advocate and asks her to take a petition to the king.  Expressing great confidence in her powerful intercession, he says: “Ask, he will not refuse you” (1 Kings 2:17).

Bathsheba agrees to go to the king. But this time, when she enters the royal chamber, she finds herself receiving royal treatment.  The king stands up to greet her and bows before her.  He then orders a throne to be brought in for her, and she is seated at his right hand, the position of authority (1 Kings 2:19-20; cf. Ps. 110:1).  Nowhere else in Scripture does the king honor someone as much as Solomon honors the queen mother in this scene.

Even more remarkable is how King Solomon affirms his commitment to the queen mother’s intercessory role in the kingdom. After Bathsheba mentions she has a request to present, Solomon responds, “Make your request, my mother, for I will not refuse you” (1 Kings 2:20).

All this serves as important background for understanding how the New Testament portrays Mary, the mother of the King Jesus, as queen mother in Christ’s Kingdom.

For example, in Luke’s account of the annunciation, the angel Gabriel told Mary she would become the mother of a royal Son who would fulfill Old Testament hopes about the Messiah’s everlasting kingdom (e.g., 2 Sam. 7; Ps. 2, 72, 89). The angel said: “And behold, you will conceive in your womb and bear a son, and you shall call his name Jesus. He will be great, and will be called Son of the Most High; and the Lord God will give to him the throne of his father David, and he will reign over the house of Jacob for ever; and of his kingdom there will be no end” (Lk. 1:31-33).

If ancient Jews heard of a woman giving birth to a new Davidic king, they would easily conclude she was a queen mother. And that’s exactly the vocation Mary receives at the Annunciation. She is the royal mother of the king who will sit on “the throne of his father David” and of whose “kingdom there will be no end.”

Mary’s royal office is made even more explicit in the next scene of Luke’s Gospel, the Visitation.  Here, Elizabeth greets Mary saying, “Why is this granted me, that the mother ofmy Lord should come to me?” (Lk. 1:43).

This title “mother of my Lord” is packed with great queenly significance. In the royal court language of the ancient Near East, the title “my Lord” was used to address the king (see 2 Sam. 24:21).  Therefore, “mother of my lord” would mean, “mother of the king,” or in other words, queen mother.  In using this particular title to address Mary, Elizabeth recognizes the great dignity of Mary’s royal office.

Another passage that sheds light on Mary’s queenship is in the Book of Revelation, chapter twelve: “And a great portent appeared in heaven, a woman clothed with the sun, with the moon under her feet, and on her head a crown of twelve stars; she was with child…” (Rev. 12:1-2).

Who is this mysterious woman of the Apocalypse?  While some interpreters suggest the woman symbolizes Israel or the Church, she also can easily be seen as Mary, the mother of Jesus.  Indeed, Revelation 12 portrays this woman as the mother of the messiah. In Revelation 12:5 the woman’s son is attacked by the devil, taken up to heaven, seated on a throne, and destined to “rule all the nations with a rod of iron,” alluding to a prophecy about the messiah-king (Ps. 2:9). If the child is Christ—the messiah—then who is this mother of Christ? Clearly, the woman would be seen as Mary.

Therefore, Mary appears in Revelation 12 with royal splendor, reigning in heaven as the mother of the king. Like the queen mothers of old, she wears a crown on her head, expressing her royal office.  The twelve stars on her crown symbolize her reign in the Church, which was born from the 12 tribes of Israel and is founded on the 12 apostles.  She is clothed with the sun, radiating God’s glory, and even the moon being under her feet points to her royal authority—since “under the feet” imagery symbolized royal power and defeat of one’s enemies (e.g., Psalm 8:6; 110:1).

Just like the “Great Lady” of the Davidic kingdom, Mary continues to serve as an advocate for the people in God’s kingdom today. As queen mother, she is the most powerful intercessor in Christ’s kingdom, presenting our needs before His throne. Therefore, let us approach our queen mother with confidence, knowing that she faithfully carries our petitions to her royal Son, who responds to her as Solomon did to Bathsheba, saying: “I will not refuse you” (1 Kings 2:20).