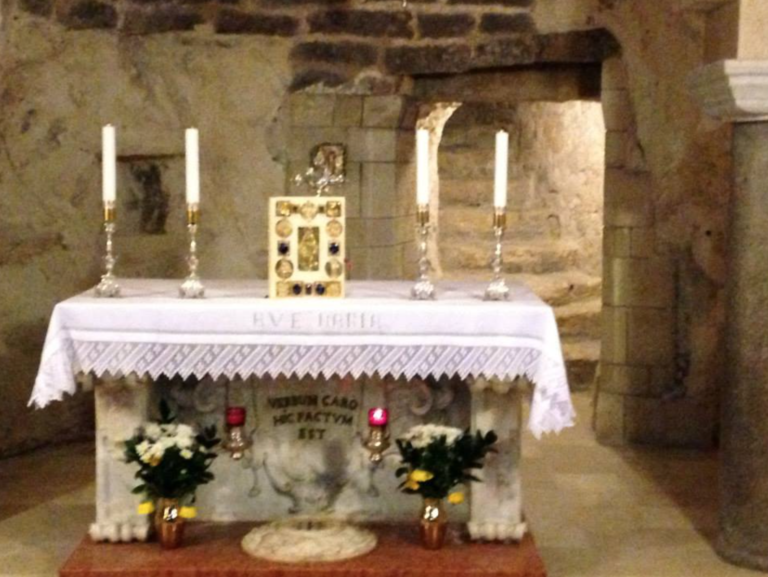 Why was Mary troubled?

But that’s not why Mary was troubled. Luke’s Gospel tells us, “Mary was greatly troubled at the saying and considered in her mind what sort of greeting this might be” (Luke 1:29). Mary was not so much troubled by the sight of the angel as she was by what the angel said. There was something troubling about the angel’s greeting.

The angel addressed Mary, saying: “Hail, full of grace, the Lord is with you” (Luke 1:28). For a young Jewish woman of the first century, that last expression—“the Lord is with you”—would bring to mind what was spoke to the many great heroes of the Old Testament. When God called someone to an important task, to a mission that would stretch the person like never before, the assurance that the Lord would be with that person was often given. When Moses, for example, was called by God at the burning bush to convince Pharaoh to let the people go, the Lord told Moses, “I will be with you” (Exod. 3:12). When Joshua was called to lead the people into the hostile territory of the Promised Land, God said, “I will be with you” (Joshua 1:5) When Gideon was called by the angel to liberate the people from the Midianite oppressors, the angel said, “The Lord will be with you” (Judges 6:12).

So when Mary hears from the angel, “The Lord is with you,” she is standing in the tradition of Moses, Joshua, Gideon, David and the prophets who heard similar words when God called them to their crucial missions. These words would indicate to Mary that God is about to call her to some important mission in His saving plan. Upon hearing these words, Mary probably was thinking “Uh oh….What might God be asking me to do?” No wonder she was greatly troubled!

To feel troubled when we sense God is calling us to do something difficult is understandable. So if you sense that God might be inviting you to step out of your “comfort zone,” to trust Him more, to be more generous with Him, to make a greater sacrifice for Him, it is natural to feel a little fear and trembling. If, for example, you sense God might be calling you to move to a new city, take a new job or start working in a new ministry, that can be scary. If you sense God might be asking you to give more time to Him in prayer, to ask forgiveness from someone, to make a change in your moral life, or to spend less time building your career and more time with your family, you might be greatly troubled and not want to change. These feelings of fear are natural. Moses, Gideon and even the Blessed Virgin Mary experienced these emotions.

But the crucial question we face in any discernment is what will we do with those fears? Mary did not allow her fears to control her. She remained truly open to God’s will, even though the angel’s message what troubling. The Bible tells us that Mary “considered in her mind what sort of greeting this might be.” That word “considered” in the Biblical Greek (dielogizeto) is the word from which “dialogue” in English is derived. The term describes an intense, extended reflection. Therefore, even though Mary is “greatly troubled” by the angel’s greeting—even though she experiences some fear and trembling knowing that God may be asking her to do something difficult, she remains in dialogue with God.

Many of us, however, allow our fears to get the best of us. When we tremble at the prospect of a new direction in life, we might be tempted to close our hearts to God and try to convince ourselves, “Surely, God isn’t asking me to do that.” When we are afraid that God might be knocking on the door of our hearts to do something we don’t want to do, we might busy ourselves and try to avoid thinking about where the Lord might be leading. Instead of being open to God’s will, we establish pre-set parameters around which we will allow God to work in our lives. Instead of remaining in dialogue with God, we close off the conversation.

Mary, as the first and model disciple in the New Testament, did not allow herself to be controlled by her fear. She rose above those initial troubled emotions and remained truly open to whatever the Lord might be asking of her. This fundamental disposition prepared her to hear the Lord’s call in her life and paved the way for her faithful response, “Let it be done unto me according to your word” (Luke 1:38). Mary’s Fiat—her “Yes” to the angel’s message—might not have happened, however, if she let fear keep her from being open to hearing God’s will for her life.

So the next time we have to discern God’s will, let us be careful not to let our initial emotions of fear rule out certain possibilities the Lord may be presenting before us. Let us not allow our troubled feelings to prevent us from being open to God’s will. Let us, like the Blessed Virgin Mary, rise above whatever initial, troubled emotions we may experience and remain in dialogue with God.